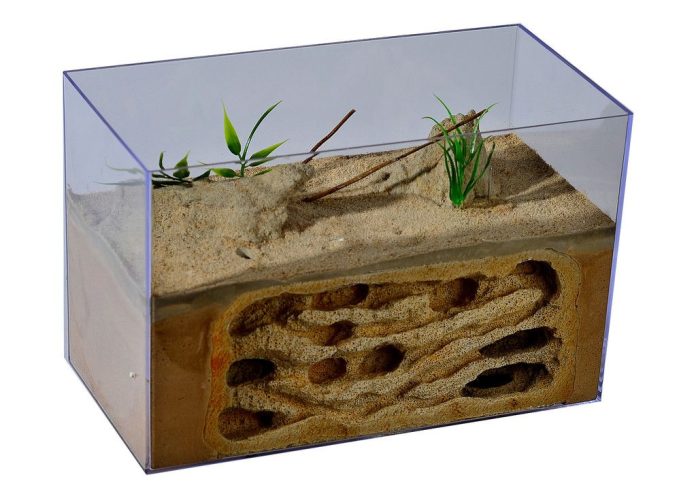 In the 1900s, French engineer Charles Janet invented the first ant formicarium. He sought to increase the visibility of the typical ant colony so that it might be observed. His groundbreaking design of a two-dimensional ant nest spawned a slew of later patented ideas that we now recognize. Charles had no plans to market the vivarium and was hesitant to have it displayed at the Exposition Universelle in Paris in 1900.

How to Construct an Ant Formicarium

A formicarium is an enjoyable activity for people of all ages. You can make an ant farm out of nearly anything once you learn the important elements. This portion of the book will go through the fundamentals of constructing an ant vivarium.

Putting The Nest Together

The formicarium’s foundation is the Nest layer. This layer will be present in all ant farms, regardless of the arrangement. Typically, this zone will be made up of dirt, sand, or even gel. The queen and the majority of the ant colony will be housed here. When not monitored, the nest location should be relatively dark to encourage a healthy and growing colony.

The above-ground surface region utilized for obtaining food and disposing of trash is known as the Landscape layer. The ants will hunt for supplies in this section of the vivarium. Here’s where you’ll drop food for your ants to spread among the colony. You may also see that ants may put undesired materials such as their excrement, dead, and loose soil here to keep them as far away from their colony as possible. If a hardscape is to be used, it will be installed here as well. Depending on personal inclination, this might be numerous types of wood or stone.

The ozone level of this small biosphere is represented by the Containment layer. This zone is an important aspect of the perimeter since it prevents our ants from fleeing. Nontoxic deterrents such as petroleum jelly, talcum powder, or PTFE have been used in the past to accomplish this.

Setting up an ant farm is a simple procedure that does not need the use of a lot of supplies. It will either be a basic two-step container with soil, depending on the sort of formicarium you want to develop… Alternatively, a filtration-enabled paludarium. The next part will show you how to make ant vivariums for any number of ant colonies.