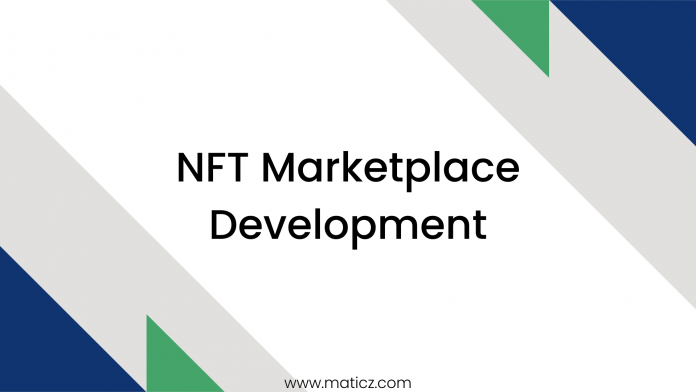 NFT Marketplace is a promising platform to begin your business empire in the crypto sphere. As the world moves toward digitalization many have brought various solutions and NFT marketplace is one of them. NFTs brought many forms of digital assets under their single roofs like art, images, videos, metaverse, and all other digital collectibles. Investors have launched many NFT marketplaces in the global market and are gaining many users since 2021.

The concept of the NFT marketplace has attracted the young generation towards it. Also, it has brought most artists to take part in NFT evolution by releasing their creations in form of NFTs. Each NFT marketplace has its own benefits with respect to its blockchain ecosystems.

NFT Marketplace Development has brought solutions to the problems in taking the NFTs to reach the people around the globe. The development of the NFT marketplace involves various sets of work processes from planning to deployment. A well-expertise team of blockchain developers works with multiple technology stacks to bring NFT Marketplace to the global market.

The global NFT marketplace value has been raised by over 11 billion dollars in the last quarter of 2021. These numbers will be rising more in the upcoming days. So planning for a launch of NFT marketplace with advanced features will gain more active users to the platform. And this will let the marketplace move towards the profitable side by making millions.

Listing – Providing a detailed view of NFTs will present the needed information to the buyers. And this will gain more users to your platform.

Multiple Wallet – Get multiple wallet options on your marketplace that lets many crypto users make the transaction with their desired wallet in which they hold the cryptos.

Filter – Developing NFT marketplace with advanced filter options will help the users to find out the right NFT of their choice within a short period of time.

Auction – NFT marketplace featuring with the option of auction will be an added benefit to the users in determining the price of the creators NFT.

NFT Royalty – The feature of Royalty is the best feature that most of the users would get attracted to it. This royalty feature will be a percentage of income to creator for every secondary sale.

Multi-chain Interoperability – NFT marketplace presented with a multi-chain interoperability is a market-pulling feature where various crypto users get their favourite NFTs with their own cryptos.

Ethereum is the trending open-source blockchain network that has been adopted by most of the crypto enthusiasts over the years and working on it. The blockchain network benefits in rapid deployment, permissioned networks, network size, scalability, Incentive layer, tokenization, interoperability, open-source, and performance. Ethereum’s market cap has crossed 300+ billion dollars and with more than 15+ live nodes, 40M+ unique addresses, and 500k+ daily transactions shows the user’s trust and adaption to the blockchain ecosystem. So, developing an NFT marketplace on Ethereum will benefit the admin with a wide range of audiences.

Binance Smart Chain is a credible platform and a fast-growing blockchain network in the crypto sphere with high transaction speed, low gas fees, cross-chain compatibility, EVM compatibility, and tokenization. With the exploding ecosystem, developing your NFT marketplace over BSC will attract many crypto users to your platform. BSC transaction fees are around 20 times less than the Ethereum transaction fees which is one of the reasons for the reach of BSC to most of the users in the crypto sphere and has a market cap of more than 65 billion dollars.

Cardano ecosystem is the third-generation blockchain network that comes up with a two-layer core architecture. That mainly works out in reducing latency and these 2 layers are CSL (Cardano Settlement Layer) and CCL (Cardano Computational Layer). The first layer CSL is where all the transactions are carried and the second layer CCL is used to deploy smart contracts and govern the network. Cardano blockchain network comes up with the process of Proof of stake where it becomes an eco-friendly network and with less gas fee, faster transactions. Launching an NFT marketplace with the third-generation blockchain ecosystem will light up the future of the platform to a profitable side.

Solana brings in the key innovation for the future with its own blockchain ecosystem which uses the proof-of-history work sequence. This results in a high performance of more than 50,000 transactions per second. Developers have developed Solana with eight key innovations to present an advanced and futuristic ecosystem to the digital world. With the innovation of Sealevel features, the network can process tens of thousands of contracts in parallel with many cores of validators. Entrepreneurs launching NFT marketplace in the Solana ecosystem will bring an advanced NFT platform to the users of the crypto sphere.

Polygon mostly focuses on interoperability and it provides many tools to developers to design high-performance, high scaling blockchain platforms. The Polygon is the first network that fully supports the Ethereum virtual machine. Developers adopt Polygon blockchain network to implement mass adoption. As many projects are migrating to polygon it shows the brighter future of the polygon-based projects. With the market cap of more than 7 billion dollars and its rapid growth in the community marketplace on polygon will benefit your NFT marketplace in various ways.

Does the launch of an NFT Marketplace benefit the digital world?

NFT market value has crossed the milestone of billion dollars and this will be moving forward and will set several milestones in Crypto Sphere. Entrepreneurs thinking to launch the NFT marketplace may opt for any of the blockchain networks that benefit their business requirements. NFT marketplace like Opensea, Foundation, Rarible, Nifty and more are performing well in the crypto sphere, also many NFT marketplaces similar to the above mentioned are being developed and deployed on the global market simultaneously. Get your thoughts to experts of NFT Marketplace Development Company and begin your business journey with your NFT marketplace in the crypto sphere.